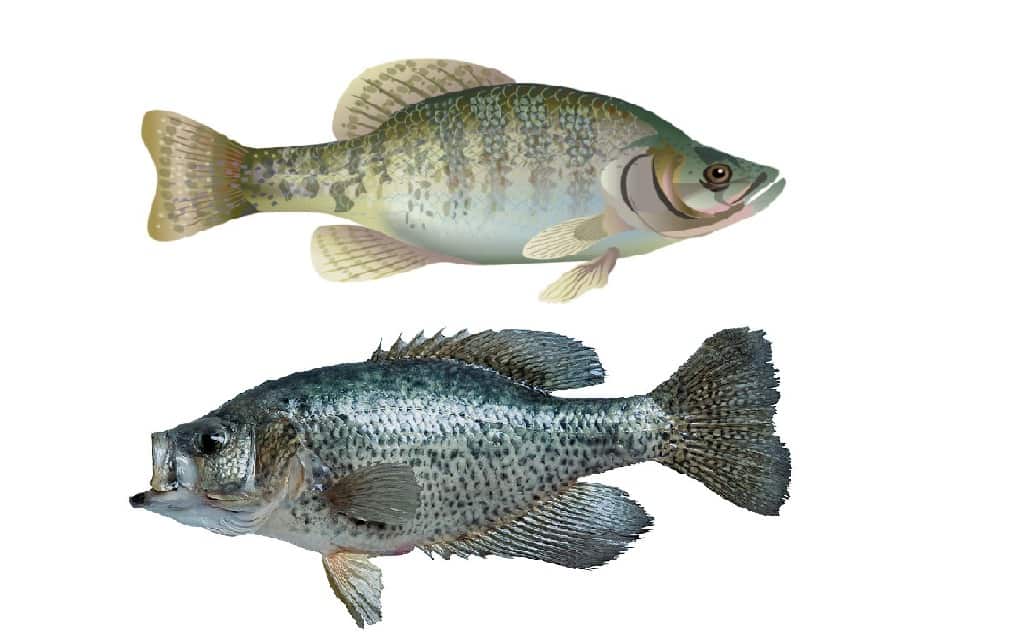 As you learn more about catching crappie, you’ll see that there are different types of them! You can find seven different species of crappie, which are the:

Read on as I show you all about these two crappie species and how they differ from one another.

The Difference Between Black and White Crappie

Before looking into the difference between black and white crappie, I first want to share to you what crappie is. These are freshwater fish that are part of sunfish families, found in the US and Canada waters. Crappie loves to eat smaller fish existing in the habitat, which is why you can attract them with jigs and minnows.

While both the black and white crappie has many similarities, these are their key differences:

The black crappie is typically found in freshwater with low currents in North America. They take shelter under thick weeds, under timber, and various vegetation. They reach about two pounds once fully grown and have a darker pattern compared to the white crappie.

Black crappies would usually measure between four to ten inches long when caught, but they can grow even larger than that! The longest black crappie caught is almost 20 inches long, so you can expect them to measure anywhere between 5 to 19 inches.

Black crappie would typically weight less than a pound, half a pound when caught. But they can also reach up to four pounds, depending on where they’re from and their activity levels in the area.

They usually feed during the early morning hours, or even from midnight until 2 AM. That’s why you’re better off fishing early in the morning if you plan to catch black crappie.

They also usually feed on crustaceans and insects, with larger black crappie feeding on other smaller fish like the shad or minnows.

Black crappies are well known for their quick reproduction rates. During each post-spawning season, the black crappie population significantly increases in small ponds and lakes.

You can find black crappies around large rivers, lakes, or water reservoirs. Expect them to reside in low-velocity bodies of water with cleaner waters and a lot of cover and vegetation. Black crappies also love sand bottoms, which freshwater bodies have.

The life expectancy of the black crappie is around seven years, if not caught earlier than that! These fish would mature at an age between two to four years old.

White crappie is also usually found in freshwaters in North America. They have a similar weight but measure a bit longer than the black crappie. Furthermore, they are found in large schools, hiding under heavy vegetation or rocks.

The white crappie usually measures between 9 to 15 inches.

White crappies weight similarly to black crappies, up to half a pound on average. But the biggest white crappie weighed up to over five pounds!

Juvenile white crappie would feed on insects and zooplankton, while mature ones would feed on smaller fish like crayfish and minnows.

Spawning would occur between May to June with water temperatures of around 56 degrees F. Female white crappies produce less than black crappies, producing between 5,000 eggs to almost 100,000. Male crappies will also guard it for a few days before hatching.

White crappies will typically be in water reservoirs, lakes, and large rivers. Unlike the black crappie, white crappies tolerate murky waters and you can find it in areas that have low velocity, like river backwaters and pools.

During morning and evening hours, you can find white crappies in open waters. Throughout the day, however, white crappies like to stay in quiet and shallow waters that have structure surrounding it.

White crappie can live longer than black crappie, for up to nine years.

Read More: When Is the Best Time to Go Crappie Fishing?

Here are the two crappies’ differences based on appearances and habitat:

With that in mind, there are no better fish species, as both look and taste equally great!

When it comes to crappie, there is more than just one type of species. While black and white crappie has many similarities, they do have key differences that affect the way they look and how you fish for them. Learning more about their differences can help you become a better angler.

I hope that this article on the difference between black and white crappie helped you out. Learn more about the different fish species to know what to expect when out in the waters now! 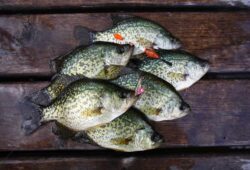 UrbanAdventure.org is a participant in the Amazon Services LLC Associates Program, an affiliate advertising program designed to provide a means for sites to earn advertising fees by advertising and linking to Amazon.com.