You’ve caught a catfish and want to know if she’s pregnant.

Because catching a pregnant catfish would mean you need to release her back into the water. You don’t want to keep one that’s holding a bunch of eggs, right?

So if you’re curious to find out the real deal about your catch, here are 5 ways on how to tell if a catfish is pregnant. These are quite easy to figure out, so you should be able to know for sure if that fish is a no-go or good to go!

The Anatomy of a Catfish – Telling a Male and Female Apart

First things first – how can you tell if the catfish you caught is a male or a female, anyway?

This is the first thing to determine before you go looking for signs on how to tell if a catfish is pregnant.

Let’s dive into the difference between the two.

Male and female catfish pretty much look similar. In fact, for the untrained eye, it can be tricky to tell which is which.

But here’s a defining feature that only females have – they are a bit plumper. Both genders have a cylindrical body and a bony flat head. With females, though, they may have that bulge right at the back portion of their abdomen. Obviously, this is a tell-tale sign that she is an expecting mama.

Signs of Pregnancy in Catfish 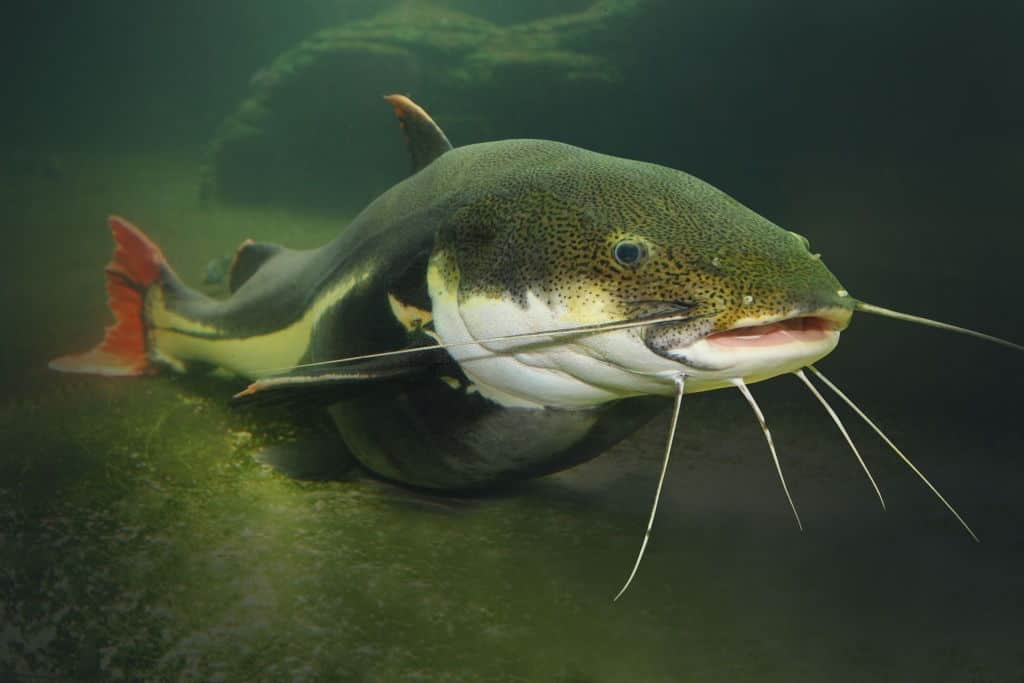 We all know that a plump catfish could mean she’s expecting. But there are other signs that will tell you right away that she’s pregnant, and you have to leave her alone. What are these pregnancy signs? Here they are:

It’s not your usual chubby catfish. But when we talk about a bulge, it is either boxy or rounded and noticeably large. The baby bump typically shows from 20 to 40 days, so it should be very easy to spot.

An overweight male catfish may have a bulge, too. But don’t mistake this for a mama fish. Their bulge is usually in the front portion of their chest and not at the back part of their abdomen, so it’s a far too different thing.

Here’s a short video that shows the bulge and how it is different from a male’s overweight belly:

A pregnant catfish develops a black or red “gravid spot” right near the back portion of the abdomen. At first, it may be a faint-looking spot but it gets darker and brighter as the pregnancy period goes by.

What’s the reason for the spot? It’s a sign that their eggs are fertilized, which means they are starting to grow inside their belly. Over time, this spot becomes close to black as the mama fish gets closer to giving birth.

This is not the usual case but it is definitely possible that pregnant catfish may swim slower than the non-pregnant ones. They struggle with swimming more efficiently as their bellies become more pronounced because of the extra weight they are carrying. The fry inside her weighs her down and slows her swimming a little.

So if you see a catfish with a bulging belly that swims slower than the others, it is possible that she is pregnant and it is best to just leave her alone.

Do you notice a fat-bellied fish hiding more or staying underwater for the most part? This is not the usual case with male catfish as they are more into swimming around and looking for food. But if a huge-bellied fish is doing otherwise, and she spends most of her time hiding and just checking out the plants underneath, it is a sign of nesting.

What this means is that she is nearing the time of giving birth. She is preparing for this event and looks for the right place to perform this process. It is also possible that a nesting catfish is just a day or two away from entering labor, and the babies are about to come out soon.

This is a sign of a female catfish in a breeding state as males become more interested in her. Chasing occurs because the female releases pheromones that are very attractive to males.

Don’t confuse chasing with bullying, though. It is a common occurrence during summer and spring. Males often pursue females and with the hopes of nudging her right under her belly. This releases eggs that males would then fertilize.

Read More: When Do Catfish Spawn In Ponds? About Raising Catfish

Generally, catfish spawn during summer and spring. Their preferred water temperature is during these seasons when the water reaches between 70 and 84 degrees Fahrenheit.

If you are planning on catching catfish during the spawning season, watch out – they are not very easy to get a hold of when they spawn. This type of fish is considered as nesters, and they prefer to lay their young in secluded and dark cavities underwater. Their preferred places to lay eggs are in hollow logs, burrows found in banks, and between boulders and rocks.

Once a female catfish has found the perfect spot, she would then lay her eggs. At this point, a male will approach the female to fertilize her eggs. Then, the male stays to protect the eggs while the female leaves. It is the male catfish’s job to ward off predators and make sure the eggs stay safe and not buried underneath sediments.

When catching fish, it is important to have an understanding of its condition before you decide to go ahead and bring it home. A pregnant catfish, for instance, is better off left alone to allow her to give birth to her young. This is why after learning the signs of pregnancy in catfish, you would know what to do next and make a better decision once you spot one during your angling trip.

What Do Mullet Eat For Bait: Your Top Bait Choices

Can You Eat Northern Pikeminnow? Eat and Cook Fish Well!

When Do Carp Spawn In Michigan? Fish the Right Time!