A lot of people ask us – “Are corbina good to eat?”

If you are thinking about cooking corbina and wondering if it is worth eating, that’s what today’s post is all about!

For those who don’t know much about corbina and are looking to try a different fish to try and serve for dinner… You may just find your new favorite fish! Here’s everything you need to know about corbina fish and whether it’s really good, nutritious, and a great catch overall.

Are Corbina Good To Eat?

You’ve probably heard of corbina fish before but never actually tried eating it yourself.

Often confused with the fish species CorVina, the California Corbina is one of the most sought-after fish in the surf zone of Southern California. These fish favor heading to the sand line and feed on sand crabs – their favorite!

The corbina fish has a fleshy projection on the lower jaw. This portion is stiff and short, which they use to detect their prey.

They also have dark fins and their average size is between 14 to 24 inches in length. Their bodies are also slightly compressed with an elongated shape. Unlike other croakers, the corbina does not have a swim bladder. Thus, they do not produce that familiar croaking sound other croakers do.

These fish are also coined as California kingcroaker, kingfish, and California whiting. They travel in small groups and swim to a depth of 20 meters or 66 feet.

The best places to find California Corbina include the Gulf of Mexico, Gulf of California, and in areas such as shallow troughs, bays, and ditches that run parallel to California’s sandy beaches.

The best thing about corbina is its versatility. Hence, cooking corbina is relatively easy and gives you plenty of options to try as far as the cooking method goes. These include grilled, pan-fried, and baked.

As we have mentioned, corbina is a versatile fish. You can prepare it in many ways but the easiest and quickest is baking it.

We prefer to use skinless and boneless corbina fillets. Since it’s a moderately large fish, you can cut the fillets into smaller pieces.

Then, you can add in your seasoning including lemon juice, lemon pepper (widely available at the grocery store), paprika, and salt. You can also pat some butter and layer it on your fish. Just let it melt to add a richer flavor to it.

Bake it at 145 degrees for 15 to 20 minutes, then garnish with chopped green onions, cilantro or parsley just before serving. This makes for a fantastic lunch or dinner that’s high in protein, low in carbs, and abundant in healthy fats.

Corbina is a delicious fish that’s highly nutritious and easy to prepare.

Do take note that it eats in shallow water, which makes it simple to catch because it stays close to the shore. However, it is a bottom-feeder, which means it tends to ingest some toxic creatures including worms.

Thus, there is a risk of a low toxicity level from this fish. But when cleaned well and prepared thoroughly, it should be safe – and even good to eat. Try the recipe for baked corbina that we just shared and enjoy this meal with your family! 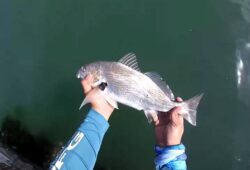 2 thoughts on “Are Corbina Good To Eat? Interesting Facts About Corbina Fish”

UrbanAdventure.org is a participant in the Amazon Services LLC Associates Program, an affiliate advertising program designed to provide a means for sites to earn advertising fees by advertising and linking to Amazon.com.