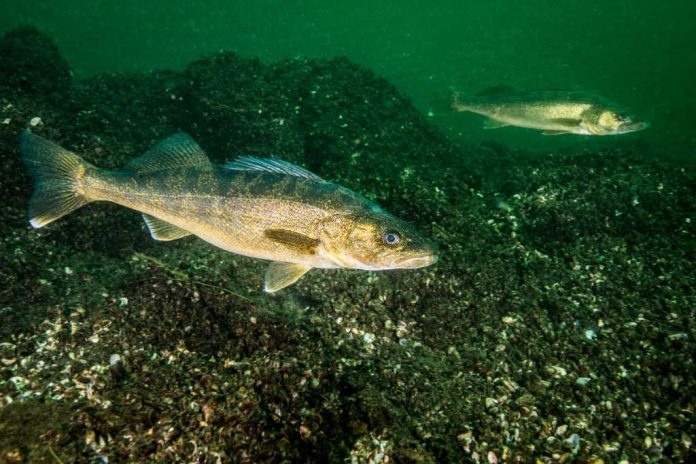 The walleye is the most prized fish in the state, holding cultural significance that goes beyond the trill to catch it and the delicious meat it gives. That’s why many anglers try to aim for walleyes when in the area!

When Do Walleye Spawn In Wisconsin?

The spawning season begins between mid-April to early May or extending from the beginning of April to mid-May.

If there’s one thing to learn about the walleye spawning activity, it’s that they are NOT territorial fish. They would broadcast their eggs and have no parental care at all, which is interesting as most male fish species would be aggressive and protective towards their eggs.

With that said, they are still abundant during spawning and might be a bit easier to catch during this time. They will be more focused on spawning and feeding over protecting their eggs.

Anglers catch thousands of walleye yearly during spawning seasons. Not only is it about the abundance of the fish, but the technique you use as well.

Walleyes are minnow feeders, but you can also use baits like small plugs or bullheads, nightcrawlers, and leeches. In clearer waters, the walleye would usually be in deeper areas during the day and move to the shallow areas come nightfall. When fishing in turbid waters, you can catch more during the day.

Be wary and slow when catching walleye though, as they have large eyes that can have them sense their prey better than other species!

Besides the right equipment and knowledge, you need to read about the Wisconsin rules and regulations when catching walleye. There is a limit of six fish and a 15-inch minimum size limit. Fortunately, there isn’t a closed walleye season!

Read More: When Do Crappie Spawn In Michigan? The Best Time To Fish!

Do you want to learn more about the walleye spawn season? Check out this video about catching walleye during these times:

When you want to fish, it’s best to time it right, particularly their spawn season when they are most abundant. With walleye, you can expect them to come out during warmer weather and once spring arrives. However, you will need to learn more than just when to fish, but how to fish for them, too!

I hope that this article answers your question, “when do walleye spawn in Wisconsin?” Now that you know the answer, start scheduling that fishing trip to get more success in your catches.

When Do Bluegill Spawn in Michigan? The Optimum Time to Fish

Is Beef Liver For Catfish Bait A Great Idea or Not?

When Do Yellow Perch Spawn in Maryland? The Answers to Learn